Skip to content
I decided today was the day to break out the maternity capris (I was tired of wearing the same jean shorts with the belly band).  Well they were super comfy but a little big.  I had to keep hiking them up!  Lol, bet I looked goofy!  AND I officially like the maternity pants without the high panel (my capris have a high panel),  at least for now since my baby belly isn’t really big enough to fill the panel in.  The panel is more annoying than anything…so I just folded it in half like my belly band, presto…it worked!
In other maternity news…I also bought 3 maternity bras!  Made my day! As my current bras are getting a little tight in the cup, I decided there was no harm in upgrading to maternity bras.  You may know that if you want a cute maternity bra…they can be super hard to find and/or super expensive.  If you’re like me, those grandma looking maternity/nursing bras are not for you!  Upon posting a question on some forums that I belong to, someone told me about the brand HotMilk.  So I googled and found them but was quickly saddened when they were priced at $55 – $70!  Ouch!  Super cute but super pricey.  This Momma can’t spend that kinda cash…then yesterday morning on a great little site called Zulily, there they were!!!  HotMilk bras for 50%+ off!  If you aren’t familiar with the site, it’s kind of like Groupon but with deals for moms and kids.  It’s free to sign up and deals change every day at 10am ET.  Go there now and sign up…no catch!  I had never bought anything from them since joining a month ago but I couldn’t pass this deal up…I got 3 maternity bras for $75…the price I could normally only get one bra for. And I think the deals on HotMilk are still up for another day or two (sizes get sold out all the time so I don’t know what is still available).
Here is a picture of one the bras I bought (now keep in mind it’s a HotMilk model, ha!): 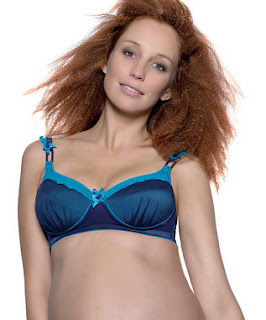 2 thoughts on “Maternity Clothes and Zulily.com”